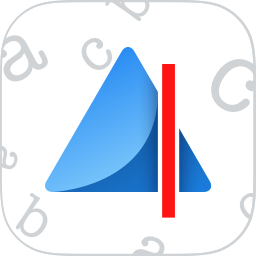 One of the first apps that iAccessibility reviewed was an app called Prizmo which would scan an image and convert any text found in that image to digital text that could be copied or opened in another program or that could be read by a screen reader. Now, the makers of Prizmo has released a new app called Prizmo Go which is a free app on the iOS app store. This new app has several features that make it similar to other OCR solutions, but it is completely accessible, and offers text to speech reading of text.

Prizmo Go lets the user scan an image and convert that image to spoken or readable text. Like other apps, Prizmo Go contains page detection, stabilization, and a field of view report to tell the user how to angle the page and the camera to get the best shot. Once you have taken the image you can have Prizmo Go read out loud any text that was found. This is an amazing feature as it allows for quick scanning and reading of documents. While scanning an image is the app’s main feature, Prizmo Go can also detect text in images from your camera roll, and from other apps through an app extension. Once you scan an image, you can purchase an in app purchase to unlock the export pack to send the scanned text out to other apps.

So one question you may find yourself asking is why should I get Prizmo Go if I have Prizmo, and the answer may surprise you. While Prizmo Go has all of the same features that come with Prizmo, Prizmo Go provides a quick and easy way to read documents and move on to your next task. Prizmo allows for the storage of multi-page documents locally on your device, or in the cloud with iCloud Drive. This makes Prizmo an extremely powerful app, but does take more time to use. With Prizmo Go, a user can open the app and quickly scan and read a document and send that document to another app without having to pick the type of document, or how to store that document or anything. The app just brings you to the scan interface and lets you scan a page quickly

How does Prizmo and Prizmo Go compare to KNFB Reader?

KNFB Reader has become a huge success in the OCR world whether the user is blind, low vision dyslexic or someone without a disability altogether. Despite this fact, KNFB Reader was designed for the people who are blind and visually impaired and is built around blindness concepts and has been built to serve a certain demographic, and while I think it is great that KNFB Reader is being used by more than just the world’s blind community, I have to really applaud a mainstream company like Creaceed for coming to the table and providing to great solutions to OCR from a mainstream perspective. Prizmo and Prizmo Go are two very accessible apps, and have been so from the start, and while I think KNFB Reader may be slightly more accurate with quicker OCR recognition time, I think that Prizmo and Prizmo Go provide a cheaper solution that can truly do more with your text then what KNFB Reader provides. I also find that the interfaces for Prizmo and Prizmo Go are more modern than that of the KNFB Reader software

Drawbacks to Prizmo and Prizmo Go

As stated previously, Prizmo Go and Prizmo have been seen to not have as good of accuracy as KNFB Reader. The process may take longer to recognize text and you may need to hold the device a certain way for Prizmo Go to detect all of the text. The other drawback is that Prizmo Go is only available for iOS where as KNFB Reader is available for Windows, Android and iOS. It is worth noting though that Prizmo does have a Mac version that costs $50.00

iAccessibility will also be reviewing Prizmo Go on our Podcast the iA Cast.

Prizmo Go on the App Store