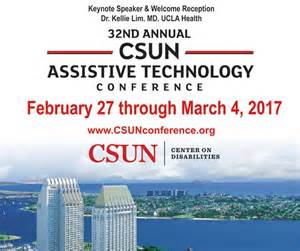 Last week I had the chance to experience the CSUN Assistive Technology conference in San Diego California. CSUN is a yearly conference to show off some of the best technologies that have come out and that are to be released during the coming year, and this year there were many devices that were shown that will make an impact on the Assistive technology community. During this article, I will discuss my thoughts of this conference and talk about what I found to be the most interesting devices and sessions I saw.

The conference is held currently at the Manchester Grand Hyatt hotel in downtown San Diego. When I booked my tickets to go to the conference in January the hotel was already booked and did not have room available, so my boss from the Austin Lighthouse and I stayed at the Residence Inn in Mission Valley.  Each day I would use Lyft to get from the hotel where I was staying to the conference hotel, and I also rode back and forth with my boss in a rental car. The trip was great to see the town, and both hotels were great. That Monday San Diego received so much rain that Monday which caused the power at the Residence Inn to go out for a day. San Diego received so much rain that much of the city had flooding beyond what they are used to which caused a lot of power issues.

On Sunday, I decided to go and explore the hotel for the convention since I was taking pre-conference classes. I learned very quickly that the hotel was very big and had a lot of space for sessions and class areas. I also learned that the restaurants at the hotel were expensive but great and serving staff was very helpful with helping customers find what they wanted to buy. I also noted that hotel staff would explain directions in terms of steps and turns which was very helpful.

Wednesday was the start of the actual conference, which was filled with many sessions and a wonderful exhibit hall. They also had several parties for people to attend to network and to meet others in the AT industry. I took the opportunity to look at several exhibits and went to several sessions, but here is the highlights from what I saw.

CSUN 2017’s exhibit hall was the size of the NFB National convention’s exhibit hall, but was made up of nothing but technology which was up my ally since I love tech. I saw several devices that I thought were nice like the ElBraille from VFO, The NeoBraille and the Braille Sense Polaris which is from HIMS.One of the things that we have been looking for at the Austin Lighthouse is accessible copiers, and Canon came to CSUN with exactly that. They showed us copiers that could be used by speaking the number of copies, and the device would also read the screen out loud. We will post more about exhibits and products that were at CSUN at iaccessibility.net soon, but you can also check out coverage from Blind Bargains for interviews on these products.

CSUN had so many sessions that one could not possibly attend all of the topics that they would like, so you have to pick and choose which ones are the best for you and your industry. Several sessions I went to sounded great but were on different topics than I would have imagined, so I did not stay at these. Personally, I found Friday’s sessions on video game accessibility to be most interesting because they focused on entertainment for everyone which I personally think is interesting. There were speekers from AbleGamers, SSB BART and Twitch from Amazon. I think my favorite session that I attended was a session on a project called the Blind Arduino Project that promotes the concept that people that are blind can become Makers, and build projects with circuits and code. We will post more on this topic in a future article here at iaccessibility.net.

CSUN 2017 has been an amazing conference, and I really urge anyone to go if they have the chance. I would also suggest that everyone go and explore San Diego as it is a beautiful city in California. The town is wonderful, and so is the hotel downtown. If you do go next year, book your rooms early, and get to the hotel with plenty of time so that you can make sure to have a room for the conference.